Comparative research on constructional safety and safety on building sites

The Dutch Safety Research Board (Onderzoeksraad voor de Veiligheid) has conducted research into a several of the accidents mentioned above and has come to the conclusion that a lack of coordination on the construction site and during construction itself, is one of the major causes of our current problems. Altogether the Board identifies four key problems: 1) lack of coordination on the building site (between all parties involved in the design and construction process), 2) opaque distribution of responsibilities between all parties involved 3) insufficient safety awareness, and 4) insufficient risk assessment. The Safety Research Board has come up with a number of recommendations in its respective research reports of the accidents. Two of those, the result of the research into the accident with the collapsing bridge sections in Alpen aan den Rijn are especially interesting (p. 84-85 of the report):

The first recommendation consists of the appointment of a central responsible party or figure for systematic assessment and management of risks involved in the construction process as a whole. The second recommendations consists of the obligation for all parties involved to, under the oversight of the above mentioned central party, cooperate in a way in which the risks involving the construction of a work are contained in the optimal way.

In order to achieve this, both risk allocation and cooperation obligations must be recorded in a coherent and unambiguous way in the general terms governing the legal relationships of the parties involved. 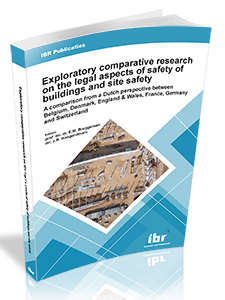 The Institute of Construction Law is of the opinion that lessons can be learned from other European countries regarding safeguarding constructional safety and safety on building sites. As a result, The Institute has initiated a comparative research project. The objective of this research is to compare both the practical and legal systems regarding constructional safety and safety on and in the direct vicinity of construction sites, in six European countries (Belgium, Denmark, France, Germany, Switzerland and the United Kingdom) with the system in the Netherlands. We wish to receive insights and knowledge on the respective legal systems and the rules and regulations concerning constructional safety and safety on building sites.
In order to obtain the necessary, and first and foremost correct, information about the different legal systems we invited national legal experts on the subject, to contribute to our research. These experts are:

The research will dig into both the rules and regulations laid down by law, as well as those established by the use of standard contracts and general terms. The research is primarily looking into private construction law. However, if a national system has a system regarding constructional safety which is based on public law and public authority powers, we will research what the influence of those regulations is on construction contracts.

Added to your request